Important Terms
A biopolymer composed of two polynucleotide chains that coil around each other to form a double helix carrying genetic instructions for the development, functioning, growth and reproduction of all known organisms. The information in DNA is stored as a code made up of four chemical bases: adenine (A), cytosine (C), guanine (G) and thymine (T). Within eukaryotic cells, DNA is organized into long structures called chromosomes. Before typical cell division, these chromosomes are duplicated in the process of DNA replication, providing a complete set of chromosomes for each daughter cell.

A biopolymer molecule with essential various roles in coding, decoding, regulation and expression of genes. The information in RNA is stored as a code made up of four chemical bases: adenine (A), cytosine (C), guanine (G) and uracil (U).

A basic unit of heredity and a sequence of nucleotides in DNA that encodes the synthesis of a gene product, either RNA or protein.
Gene
A set of features (mutations) of all other genes that can potentially affect the phenotypic expression of the gene (or genes) under study.
Genetic background

A phenotype, genotype, or gene allele (variant) that predominates in a natural population of organisms or in lines/strains of organisms in contrast to that of natural or laboratory mutant forms.
Wild type

The deliberate breeding of two different individuals that results in offspring that carry part of the genetic material of each parent.
Genetic crossing

Transposable elements found in Drosophila; commonly used as mutagenic agents in genetic experiments. They may contain various transgenes within themselves.
P-elements

A set of allelic variants of the genes of an individual organism.
Genotype

A process of determining differences in the genetic make-up (genotype) of an individual by examining the individual's DNA sequence using biological assays and comparing it to another individual's sequence or a reference sequence.
Genotyping

The process of determining the order of nucleotides in the stretch of DNA or RNA.
Sequencing

Polymerase chain reaction; a method widely used to rapidly make millions to billions of copies (complete or partial) of a specific DNA sample, allowing scientists to take a very small sample of DNA and amplify it (or a part of it) to a large enough amount to study in detail.
PCR

A genetic mutation where a single nucleotide base is changed, inserted or deleted from a DNA sequence.
Point mutation

Threadlike structures made of protein and single molecules of DNA that carry hereditary information.
Chromosomes

A transgene that determines the temporal and/or spatial pattern of expression (activity) of another transgene.
Driver

A protein that enhance the rate of transcription of genetic information from DNA to messenger RNA, by binding to a specific DNA sequence.
Transcription activator

A version of the naturally occurring two-piece guide RNA complex engineered into a single, continuous sequence. The sgRNA is used to direct the Cas9-transcriptional activator protein to bind a particular DNA sequence to control target gene expression.
Single-guide RNA (sgRNA)

The deliberate modification of the characteristics of an organism by manipulating its genetic material.
Genetic engineering

Working with fly lines carrying mutations in genes that have been shown to impact on longevity in previous studies. Obtaining combinations of mutations by crossing flies lines. Testing possible combinations of gene mutations and verification of synergistic effects on fly longevity.
Stage 1. 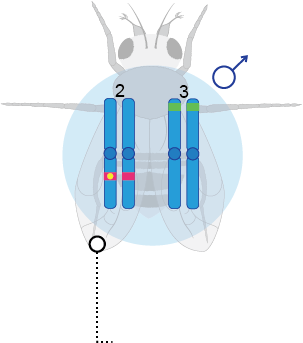 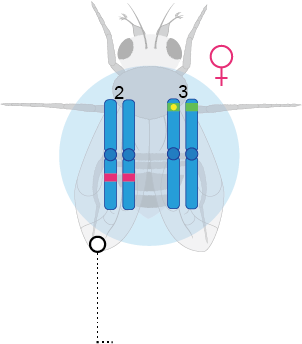 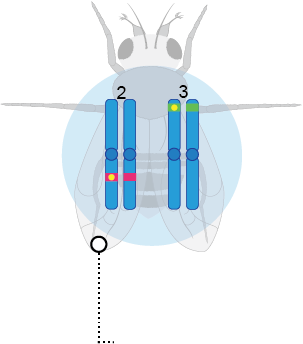 Mutation in gene A, located on the right arm of the 2nd chromosome
Mutation in gene B located on the left arm of the 2nd chromosome
The resulting combination of mutations in genes A and B
Hybridization
Work with lines belonging to the dCas9-VPR system for targeted gene overexpression. Investigation of combined effects of dCas9-VPR overexpression of target genes on fly longevity.
Stage 2.
Below is a dCas9-VPR system for targeted gene overexpression

Creation and testing of transgenic fly lines encoding sgRNA for dCas9-VPR-induced overexpression
of selected candidate genes.
Stage 3.
Below is a plan for targeted gene overexpression by dCas9-VPR system.